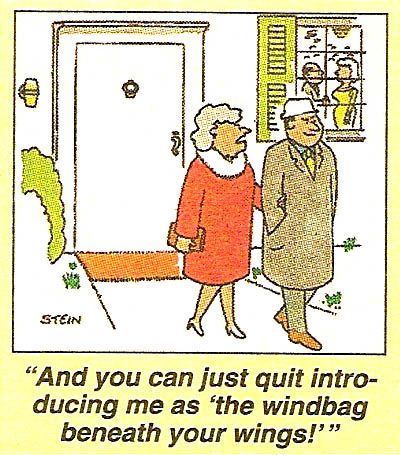 The Chronicle of Higher Education, September 8, 1993 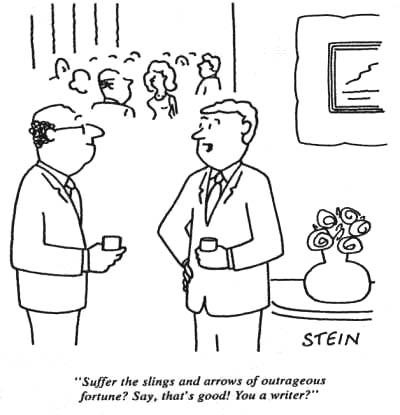 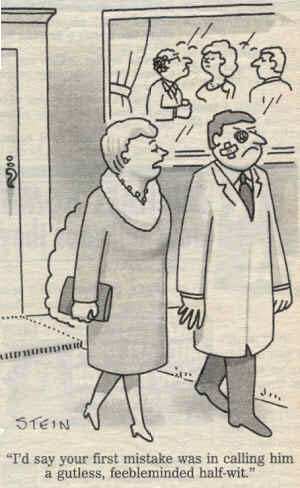 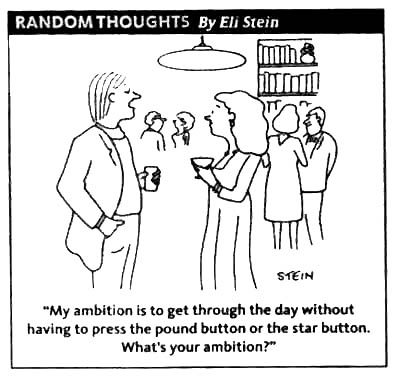 The Chronicle of Higher Education is a weekly tabloid-size publication which I consider to be the newspaper of record for colleges, universities and other institutions of higher learning. On March 21, 1990, the editors took five cartoons that they had previously purchased from me, and published them as a full-page spread, under the title "STEIN ON ACADEME".

A few weeks later, The Chronicle printed a Letter to the Editor from an Associate Professor at a well-known midwestern university. This is the entire letter. I am not identifying the name of the letter-writer or the university, for obvious reasons.

"I always enjoy the cartoons in your Section 2, especially Carole Cable's. They provide welcome comic relief from the depressing stories in the preceding pages on such matters as sex-discrimination suits, cases of sexual harassment, and the plague of racial incidents on campus.

Did anyone besides me, however, notice in the full-page of Eli Stein cartoons in your March 21 issue that of the 17 human figures depicted, all were white males except one, a white female cast as the stereotypical faculty wife, screening her husband's phone calls so that he can meditate uninterruptedly on his Next Brilliant Article? This page was dreary, if inadvertent, confirmation of the attitudes that generate those articles in your news section.

I am not amused."

When I read the letter, it blew my mind. For me, it was beyond comprehension — I can understand "hate mail" and the driving forces behind hate, but this?? It was a real eye-opener for me to realize that there are actually people out there with nothing better to do than to note the gender and racial make-up of a pageful of cartoon characters and make a discrimination conspiracy issue out of it. (Also, remember, I didn't even have any input as to how the spread was assembled or laid out — The Chronicle simply took five of my cartoons that they had on hand and put them together on one page).

After regaining my composure, I wrote a personal note to the Cartoon Editor and sent it with a new submission of cartoons. My note said, in part:

"What really disturbed me about [the Professor's] nitpicking letter is that when I showed it to my family and friends, it got more laughs than any of my cartoons ever did.

Be that as it may, [the Professor] is perfectly correct — I don't much like to draw women. My forte is balding men with glasses, and I'm sure you'll find a fair share of them in the enclosed batch."

The Professor's letter didn't noticeably affect my relationship with The Chronicle, which continued to publish my cartoons for many years afterwards.

Here are the five controversial cartoons. What say you — are we, or are we not, amused? 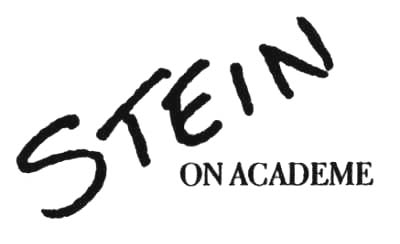 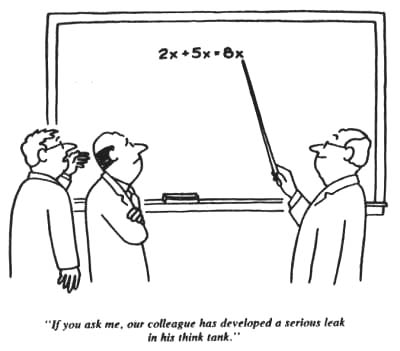 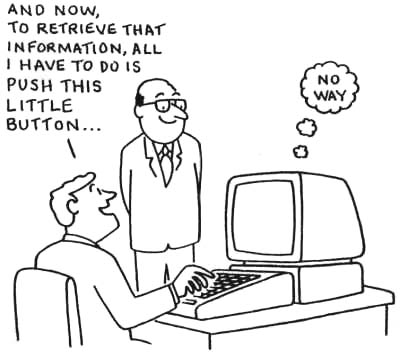 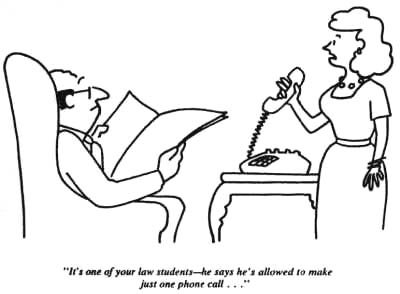 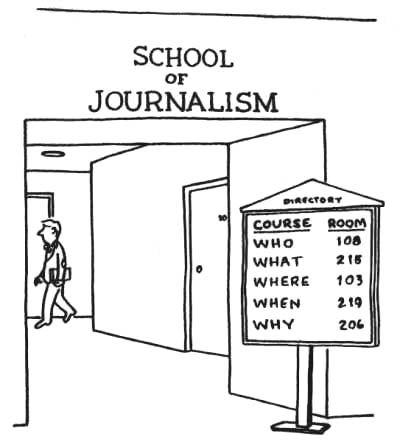 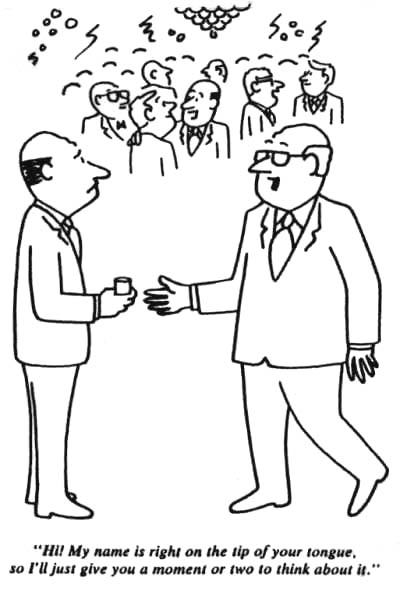 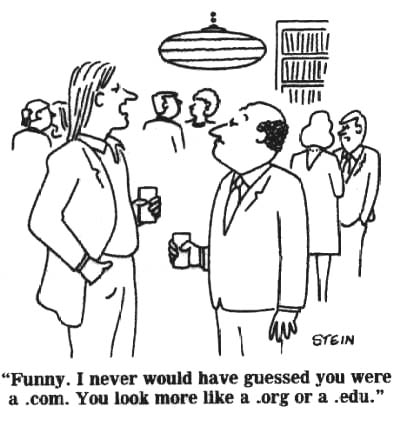 A few weeks after this was printed in The Wall Street Journal, I received a letter from a Vice-President at IBM. She said she wanted to buy the original drawing "for personal use (non-commercial display purposes only)".

I emailed her that my fee for an original would ordinarily be $200, and if IBM were purchasing it, that's what I would charge. However, I added that since she specified it was strictly for her personal use, I would reduce the fee to $150. She soon emailed back as follows: "I did say that the cartoon would be for personal-internal display purposes only, however, I did neglect to mention that it is not for my personal viewing but for the IBM CEO and Chairman, Mr. Lou Gerstner. He enjoyed your cartoon and requested that we purchase if available. So I'm not quite sure how you want to handle the cost — it's up to you."

I emailed her back and said that under the circumstances, we should split the difference and make it a fee of $175. And that's exactly what we did. 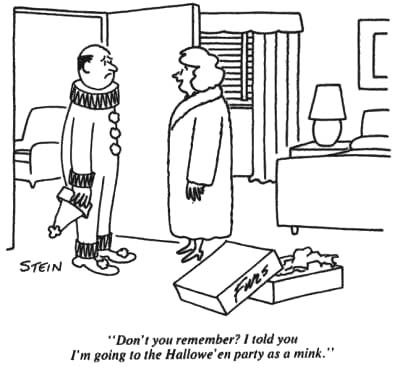 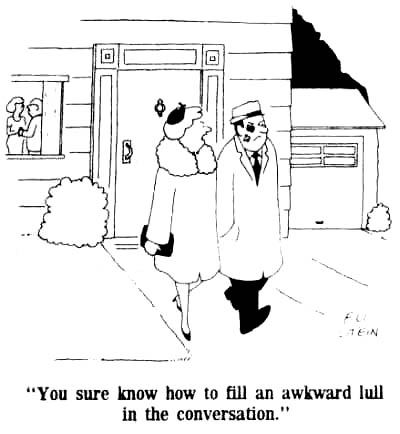 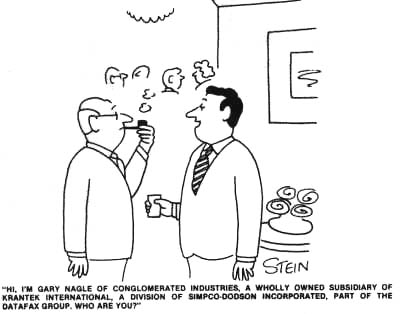 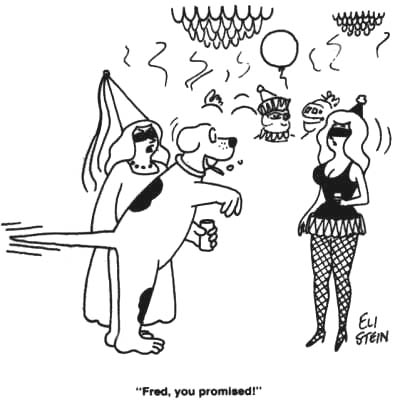 My first published cartoon in Medical Economics — still buying from me after 25 years.