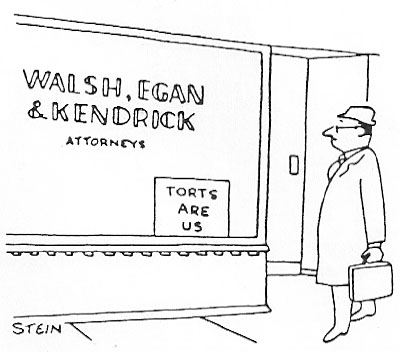 Case & Comment was a well-respected, old-line publication for lawyers. Its first issue was in 1894 and its last was in 1990 — almost 100 years! And best of all, in my opinion, it used cartoons to accompany and lighten up all that legal material.

This cartoon was purchased by the editors for a specific purpose. It was featured in a June 1988 promotional letter sent to their extensive mailing list of lawyers. I was paid a $100 bonus for that use.

Unfortunately, they must have sent it to the law firm that represented the “Toys R Us” merchandising group. As the editors later informed me, it resulted in a “cease and desist” letter and Case & Comment was forced to discontinue the promotion.

Aside: Four years later, The National Law Journal (another one of my markets, by the way) published essentially the same cartoon, but drawn by another cartoonist. The other cartoonist had the chutzpah to use the reverse “R” (Torts “R” Us), which I had been too chicken to use. I figured it was trademarked and would just be asking for trouble. I often wondered whether The National Law Journal received a similar “cease and desist” letter from the Toys “R” Us lawyers.